Ai Kaminari (also known as Ai-chan for short and Yatterman-2) is the partner of Gan Takada in the Yatterman series.

She is the only daughter of a shopkeeper who sells electrical appliances. She is Gan's loyal follower is often seen constructing and modifying machines with Gan. She is Yatterman-2, and uses a telescoping baton called "Electric Stick" to emit electric currents to shock opponents. In the 2008 version of the show, she often refer things as "100%" (for example "We are in 100% of trouble")

She works with Gan Takada and his robot Omotchama to fight the evil forces of the Doronbo Gang and prevent any trouble they are causing to get a hold of the Skull Stones.

Ai is now happily married to Gan and ends up having to stop the Doronbo in a battle once again showing up just as Jun the Swan is defeated.

Ai along with Gan and Omotchama once again have to stop the Doronbo gang through many adventures.

At this point Ai has perished and doesn't appear in Yatterman Night but her likeliness is imitated by robot clones by the oppressive Yatter Kingdom secretly managed by Dokurobei. Alouette takes on Ai's role and to become the new Yatterman-2. 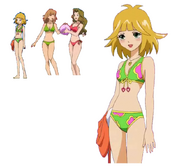 Retrieved from "https://timebokan.fandom.com/wiki/Ai_Kaminari?oldid=4476"
Community content is available under CC-BY-SA unless otherwise noted.