This article is for the original Doronjo, see Leopard for her successor in Yatterman Night.

Doronjo (real name Hiroko Sasagawa) is the villainess leader of the Doronbo Gang in the Yatterman series.

She is an attractive blonde known for her vanity, intelligence and leadership. She also occasionally smokes a skull-shaped smoking pipe and enjoys bathing.

She along with her other fellow Doronbo members Boyacky and Tonzura are sent on various missions all over the world by Dokurobei to try to locate all of the Skull Stone pieces but end up getting in various battles with the Yatterman and losing each time and being punished for failures. At the end of the series, the gang is split up and Doronjo returns to a normal life.

Doronjo and Tonzura enter a race against the villain trios of the other Time Bokan series using the Kitchenbot. After almost being blown up by the Time Skeletons, Boyacky shows and joins them and they manage to barely win the race just before Akudama Trio was about to cross the finish line. Dokurobei congratulates them but then punishes them right after having them hang over lava.

They end up causing more trouble again afterwards by engaging in a battle against the Gatchaman, Casshan, Tekkaman and Hurricane Polymar but then end up losing once the Yatterman, Gan Takada and Ai Kaminari make a return from their peaceful married life.

She along with Boyacky and Tonzura reunite the Doronbo gang once again and are sent on more missions all over the world to get skull stone pieces and continue to get defeated by the Yatterman and end up splitting up at the end again.

Doronjo has long passed by the events of Yatterman Night but it is known that she marries and gives birth. The descendants of the Doronbo are exiled from the newly established Yatter Kingdom and one of Doronjo's descendants Dorothy kept a shrine dedicated to the Doronbo Gang in the back of a shed. Dorothy's daughter Leopard takes on the alias of Doronjo and starts a rebellion against the Yatter Kingdom because of their oppressive ways which were actually resulted by Dokurobei.

Doronjo's outfit in the 2008 series

Doronjo's Artwork for Tatsunoko vs. Capcom 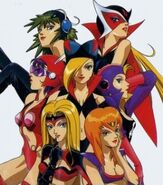 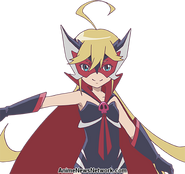 Doronjo in Yatterman Night
Add a photo to this gallery

Retrieved from "https://timebokan.fandom.com/wiki/Doronjo?oldid=4611"
Community content is available under CC-BY-SA unless otherwise noted.